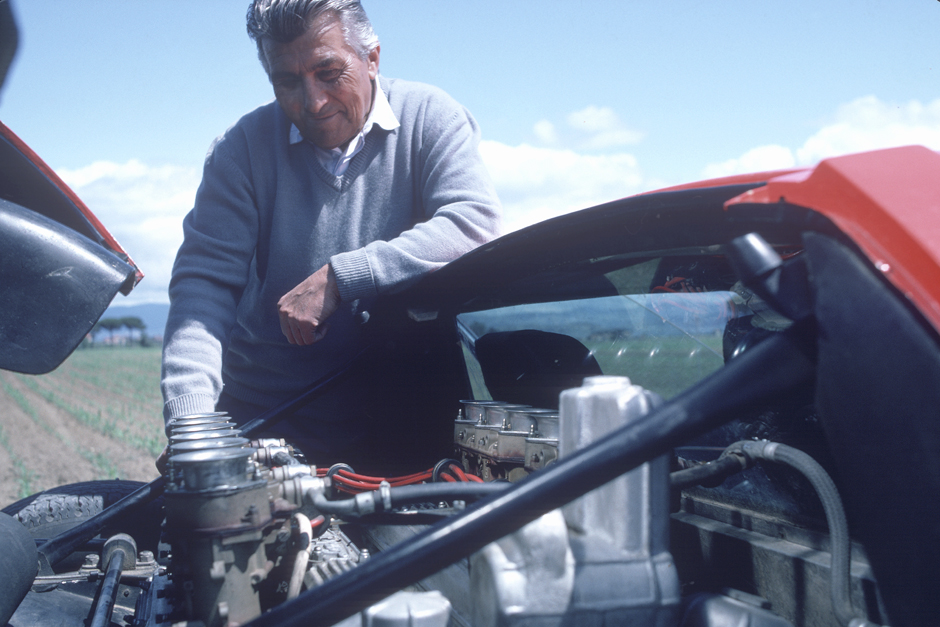 So we want to meet Ferruccio Lamborghini? No problem at all. Unlike the late
Enzo Ferrari, the creator of the Miura, the Espada and the Countach is pleased
to meet people who appreciate the cars that bear his name, owners and ordinary
enthusiasts alike. Ferruccio Lamborghini is a young man of 75, who works Monday
to Friday, 6am to 6pm, on his vineyards near Lake Trasimeno in middle Italy.
Besides having various minor business interests, he is still president of three
factories which produce tractors, air-conditioning equipment and hydraulic
systems.

We have to travel 220 miles south from the Lamborghini car factory at Sant'Agata
Bolognese to meet the man who shattered Ferrari's domination in the late
Sixties. Eventually we turn off the main road and down a dusty country lane
which leads us through the vineyards. Cantina (winery) reads a sign, and on the
right there appears a hall housing Lamborghinis even more massive than the LM002
off-roader: the tractors which are still built in a joint Swiss/Italian venture.

Next door is Lamborghini's museum. Apart from examples of 350GT, Islero,
Espada, Jarama, Urraco, Miura and Countach, there are several Lamborghini
tractors displayed here, starting with a rather crude-looking device from the
late Forties. But we enter the small office opposite and ask for Il Cavaliere.
His private secretary tells us he is out in the fields. "Just drive on; he's
expecting you."

Construction work is going on at the end of the dusty road, and a short, stocky
man wearing a cowboy's hat is talking things over with the workers. “Ali, so you
have arrived! I'm Lamborghini. We are just building a golf course over there,"
he immediately explains, pointing towards the horizon. "Golf has a big future.
The right sport for the right people." I make the mistake of asking Il Cavaliere
which architect he chose to design the course. "It's me!" he exclaims, jabbing a
thumb at his chest. "I looked at more than 40 golf courses all over the world,
from California to Japan. Now I know how to do it myself."

We are totally captivated by this charming man. Ferruccio Lamborghini was born
in 1916, the son of poor peasants in a poor country village. By the end of the
Sixties, his companies employed about 4,500 people - but a few years later he
was heavily in debt. Now, at 75, he is a man of considerable wealth again, who
sees no reason to stop working. "When you stop working, you start to die!"

Lamborghini still remains very much a peasant at heart, and is the kindest man
we have ever met. After demonstrating a hydraulically powered golf caddy of his
own design - "We start production next year" - he invites us back to his flat,
sits us down and makes coffee. Yes, Ferruccio Lamborghini is making us coffee!
Just imagine Enzo Ferrari making a coffee for visiting journalists in the
kitchen of his Fiorano residence...

So what was Lamborghini's first car? "I started motoring soon after the war,
with a Fiat Topolino. I went through a large number of them, and soon I began to
tune them, taking the displacement up from 500 to 750cc and fitting my own Testa
d'Oro head to convert them from side valves to overhead valves." In 1948,
Lamborghini and a certain Baglioni entered the first post-war Mille Miglia with
a Fiat 750 Testa d'Oro. Their race finished prematurely in an inn near Fano,
"which we entered by driving through the wall," according to Lamborghini.

As his wealth increased, the young industrialist turned to Alfa Romeo and Lancia
in the early Fifties. "I had an Alfa Romeo 1900 Sprint first and a 1900 Super
Sprint later, both of which were quite good. But I preferred the Lancia Aurelia
B20. It was no more powerful than the Alfa, but much more sophisticated, more
civilised. I had a number of Aurelias, over the years - six or seven, I guess."
This was when Lamborghini began running up to seven cars at the same time, so
that he could choose a different one every day of the week.

"In 1954 or '55, I got a Mercedes 300SL, the one with the gullwing doors. It was
a remarkable car, a very progressive design for its day. No, I did not keep it.
After two or three years I sold it to a friend. I had to try something new."
Typical of Ferruccio Lamborghini...

"Later on, I had two Maserati 3500GTs. Adolfo Orsi, then the owner of Maserati,
was a man I had a lot of respect for: he had started life as a poor boy, like
myself. But I did not like his cars much. They felt heavy and did not really go
very fast; normally 220kph [138mph], perhaps 230 on a cool day." What about the
eight-cylinder cars, the Quattroporte, Mexico, Ghibli? "No, I never tried any of
those. When they became available, I already had my own GT, and with my
12-cylinder engine I was playing in the first division - against Ferrari."

Before turning to Ferrari, I asked Lamborghini about the other supercars of the
day - Jaguar, for instance. "I only ever had one of those, a very early E-type
coupe" (it seems that Lamborghini never drove roadsters or spiders). "It was a
very attractive car and I really liked being seen in it! But on the road I found
the rear end was rather nervous, even though on paper the rear suspension looked
great." Ferruccio demonstrates with his hands how the rear end oversteered to
the left, then right, left, right... "But it looked so good. When I had my first
car built by Scaglione, I told him that I wanted an Italian version of the
E-type."

Why did Lamborghini choose Franco Scaglione? "Well, in the early Sixties there
was quite a number of designers and stylists to choose from. But Scaglione
arrived at my place in a big shiny Mercedes, immaculately dressed and
accompanied by a breathtakingly beautiful secretary. ‘Your car will be ready in
a week,’ he told me. So I gave him the job. In the end my car was bodied in a
ramshackle hut that hardly measured three or four metres long."

Did Lamborghini ever try an Aston Martin, a DB4, say, of that period? "Yes, but
I did not like it." I look surprised. The DB Astons are considered great
supercars of the Fifties and Sixties; even James Bond had one... "Perhaps you
are right, but I did not like it. The one I tried felt very much like an English
version of the Maserati 3500GT: upright and old fashioned, noisy and choppy."

Finally we turn to Enzo Ferrari's cars. "I had three or four of them. The
Ferrari was a very good car, I must admit, the best I had had so far apart from
the Mercedes 300SL. After I got my first Ferrari, my other six cars - Alfa
Romeo, Lancia, Mercedes, Maserati, Jaguar were always left in the garage."

What types of Ferrari did Lamborghini own over the years? "In 1958 I went to
Maranello for the first time to buy a 250GT coupe, the two-seater by
Pininfarina. After that I had one, maybe two, 250GT Berlinettas, the short
wheelbase car from Scaglietti. I did like that one very much. It was ahead of
its time, had a perfect balance and a strong engine. Finally I bought a 250GT 2
+ 2, which was a four-seater by Pininfarina. That engine was very strong too and
it went very well.

“All my Ferraris had clutch problems. When you drove normally, everything was
fine. But when you were going hard, the clutch would slip under acceleration; it
just wasn't up to the job. I went to Maranello regularly to have a clutch
rebuilt or renewed, and every time, the car was taken away for several hours and
I was not allowed to watch them repairing it. The problem with the clutch was
never cured, so I decided to talk to Enzo Ferrari. I had to wait for him a very
long time. 'Ferrari, your cars are rubbish!' I complained. Il Commendatore was
furious. "Lamborghini, you may be able to drive a tractor but you will never be
able to handle a Ferrari Properly.' This was the point when I finally decided to
make a perfect car.

"To start with, I bought a bigger clutch from Borg & Beck and had it fitted in
the tractor factory workshop. Then we discarded Ferrari's cylinder heads, which
were rather simple affairs with just a single overhead camshaft and 12 rockers.
I had them replaced by heads of our own design with twin cam shafts. We then put
the engine back in the 250GT and fitted six horizontally mounted carburettors,
just like on the 350GT two years later. It was already quite a good car.
Several times I used to wait for test drivers from Maranello, with Prova MO
plates on their cars, at the entrance to the motorway near Modena. After some
time we would be doing 230, 240kph [145-150mph] and then I would start to pull
away from them - my Ferrari was at least 25kph faster than theirs thanks to our
four-cam conversion. 'Hey, Lamborghini, what have you done to your car?' they
would ask me later 'Oh, I don't know" I used to answer with a grin!”

Did Lamborghini still have any personal contact with Ferrari after the launch of
his own GT car in late 1963? "One day in Modena I was entering a restaurant when
I recognised Ferrari sitting at one of the tables. As I passed I tried to greet
him, but he turned his head away and pretended to be talking to the person next
to him. He was ignoring me!" Ferruccio grins. "I used to have contact with
Adolfo and Omer Orsi of Maserati, Renzo Rivolta of ISO, even Alejandro de
Tomaso. But Ferrari never spoke to me again. He was a great man, I admit, but it
was so very easy to upset him."

As soon as he was producing his own GT, Lamborghini started to use one as his
everyday hack, personally owning two Espadas and a Miura, a Jarama and an
Urraco. "I preferred the Jarama to all the others, because it is the perfect
compromise between the Miura and the Espada. The Miura is a sports car for the
young at heart who want to go like hell and love to be seen. Myself, I
considered the Miura too extrovert after a while. In turn, the Espada was my
Rolls-Royce: still quite fast, but also large and comfortable. The Jarama is the
perfect car if you just want to have one car." The Urraco? "I thought the Urraco
the ideal car for women who love to go fast. And the Bravo I planned as the car
for lovers.." Why? "Because my friend Bertone was going to tint all the glass
completely black!"

Ferruccio opens another bottle of his homegrown red wine, Sangue di Miura
(Bull's Blood), lights another cigarette and listens to us patiently. Who
decided on the character of future models in the Sixties? The sales director,
the engineers, or Bertone, the designer? "Difficult to explain," says Ferruccio,
trying to remember. "Personally I thought it important to launch a new car every
year to show that we were still here and very active. Look: in 1963 we had the
350GT. In 1965 the 350GT Spider and the Miura. chassis. In 1966 there were the
400GT and the Miura. In 1967 the Espada. In 1968 the lslero, and in 1969 the
Islero GTS. In 1970 the Jarama and Urraco. In 1971 the prototype Countach. In
1972 the Jarama GTS. In 1973 the production version Countach. 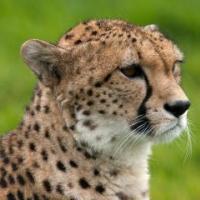